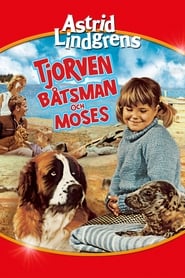 Vesterman has found a young seal in his fishing nets in the outskirts of the archipelago. When he comes back to the Saltkråkan island he gives the seal to Tjorven, who names it Moses. Peter Malm, a visitor who works at the Zoological Institute in Uppsala, wants to buy the seal, but Tjorven says it's not for sale. Vesterman is in need of money and tries to get the seal back, to sell it to Peter. The children have to hide the seal, so he won't find it. Pelle's rabbit Jocke and one of Söderman's lambs are found bitten to death. The dog Båtsman is accused of those evil deeds, which means that Tjorven's father has to shoot her dog. In the last minute Söderman finds out that a fox is the perpetrator. Peter Malm says he won't buy the seal. Vesterman is disappointed and the seal stays with the children.