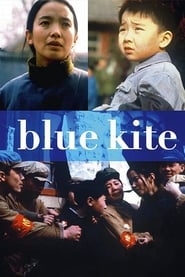 On Dry Well Lane in Beijing in 1953, Chen Shujuan and Lin Shaolong marry. A year later their son, nicknamed Tietou (Iron Head), is born. The Party is everywhere: Mao's photograph, loud-speaker announcements, visits from the neighborhood committee. Shaolong dies in a reform camp; a close family friend, who protects Shujuan and her son partly out of guilt for lying to authorities about Shaolong, succumbs to malnutrition; a confrontation with the Red Guard leads to injury, imprisonment and death. Shujuan's love for Tietou sustains her, and the child's blue kite embodies hope: "I can make another for you," says Tietou's dad; by the end, Tietou promises this to a small child