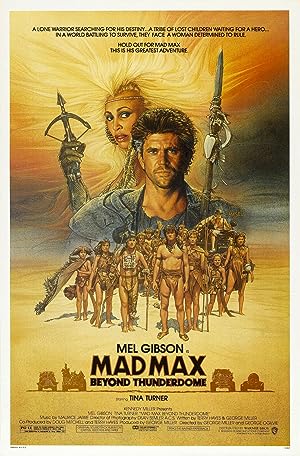 Left for dead in the unforgiving deserts of post-nuclear Australia, after defeating Lord Humungus' barbarian horde of bikers in Mad Max 2 (1981), the former officer of the tough Main Force Patrol, Max Rockatansky, happens upon Bartertown: the remote market-town outpost in the middle of the dry Wasteland, and the realm of the autocratic Queen Aunty Entity. There, a lethal challenge awaits Max, who, in return for his freedom and provisions, must engage in a bloody match to the death with the grotesque symbiotic being, the Master/Blaster. However, an unforeseen complication after the brutal fight in the stronghold's combat arena, The Thunderdome, will banish, once more, Max into the vast wilderness, only to discover the peaceful haven of The Lost Tribe: a community of marooned children who survive on their own, waiting for the arrival of the legendary Captain Walker. Is "Mad" Max, indeed, their saviour? Can he overthrow Bartertown's ruthless tyrant?